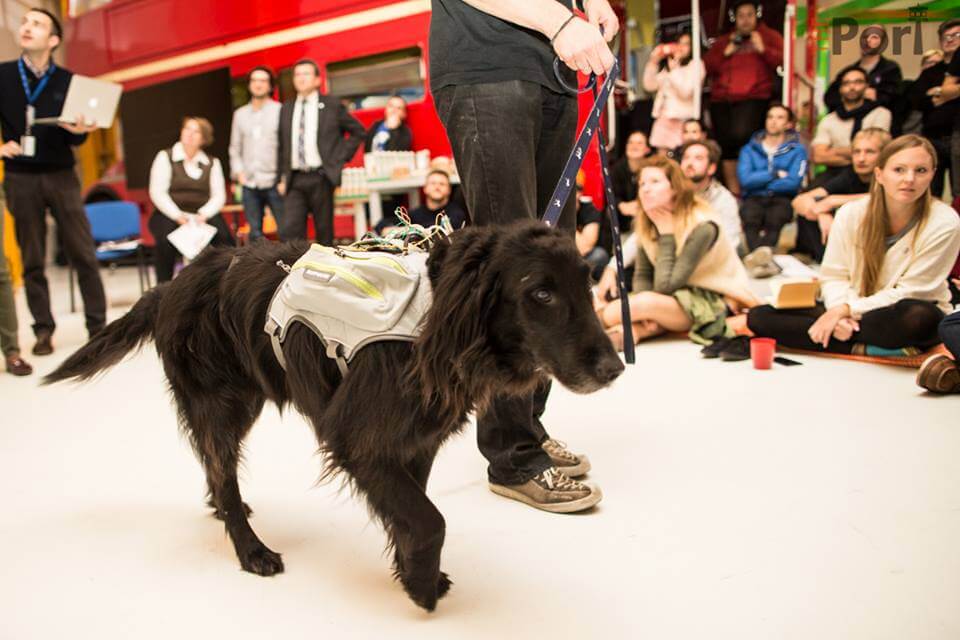 Smart Dog is a demining system built in The Port hackathon, CERN 2014. Dogs have been used in demining operations all around the world for a long long time. The Dogs are usually accompanied by a human handler, and their job together is to comb an unknown area to make sure there are no mines. The presence of the human handler though necessary, acts as a major deterrent in the whole process, and hence slowing the process down by a huge margin. The dog loses its freedom, and also the overall increased risk of the human handler mistakenly stepping on a mine. The Smart Dog project, decouples the human handler and the demining dog by the help of technology. We glued together a whole ranger of sensors on an arduino and made it talk with a raspberry PI which is connected to the local network through wifi. The handler now has to fire his laptop (which has a military grade wifi-router) along with it, and creates an ad-hoc network. Then the client devices on the dogs are switched on, which automatically pick up this Wifi network based on the SSID, and finds the central server in that isolated network. The handlers laptop serves as the server in this case. And then it starts streaming a video feed from the dog along with the data from the rest of the sensors(accelerometer, gyroscope, heart beat sensor, magnetic field sensor, GPS sensors) to the handlers laptop. We also have a bidirectional audio channel for the handler to speak with the dog. This enables the handler to stay in a far away safe place, while letting the demining dog do what it does best. The handler knows everything he needs to know about the dog in realtime(including the location), and can also steer the dog using audio commands. In the end whenever the dog finds a mine, and the handler confirms from the Visual feedback(if possible), the handler notes the location from the GPS coordinates, and also apart from that, releases a Beacon at that spot. Then the tactile team is sent to that location to carefully demine the mine. This increases the overall efficiency and safety by a huge margin.

Here is a small video explanation of the whole project created by Adria, one of my team mates :

And here is a small demo of the final project(this is not very clear, and there the whole system is not mounted on a dog here, will soon be uploading the video from the final demo we did at the hackathon with a real dog)

This project was later presented at Science X Kickstarter, at NYU ITP.